A Private Tour of Fenway

My friend, Nicole was able to pull some strings and book a tour of Fenway before she left Boston.  This wasn't the official tour given by a tour guide (I've done one of those before, and they're pretty informative) but a favor-for-a-friend tour given by someone from the Fenway Affairs office.  Therefore, instead of starting in the Absolut Lounge which leads directly into Fenway grounds, we walked through the wooden doors of 4 Yawkey Way and got to enter the office areas.

The first thing I noticed was the framed official pictures of all the players lining the wall in the reception area.

click here for the bigger version
I think I've IDed everyone except for the upper-right most picture.  It's probably Ramon Ramirez, but the glare doesn't help.  Right across from that is this quote painted on the wall: 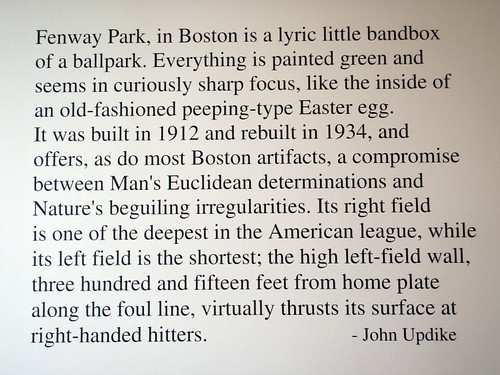 The grammar cop in me feels like there should be another comma after "in Boston", but what do I know?  And around the corner from the receptionist's desk were these two beauties: 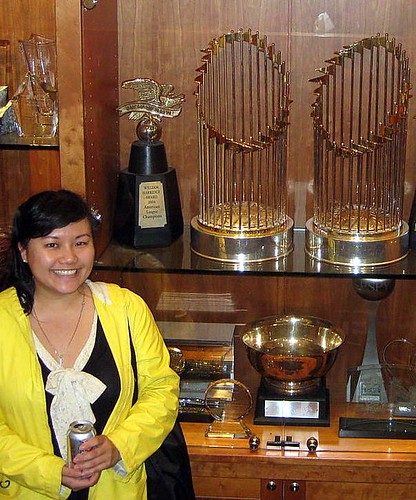 At first I couldn't believe my eyes because it was just so unexpected.  I mean, there were no huge signs pointing at them saying "WORLD SERIES TROPHIES!!!" with blinking lights.  They were just...there....next to the receptionist.

The tour itself was kind of cool because even though we did the usual walk up the Green Monster, down through the Grand Concourse, up to the Right Field Roof Deck, and behind the Club Boxes, there was like no one else there since it was an Off Day.  So I got to take these shots which I normally wouldn't have been able to get: 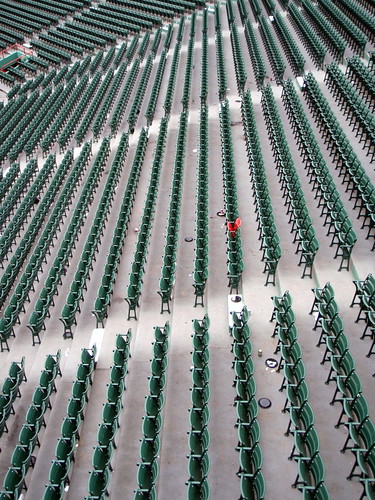 Notice how they're mowing in a new pattern in the outfield and have some crazy pattern going on in the infield.  I wonder if that'll influence how a bunted ball rolls around in there.

We asked if we could go on the field, but apparently that wasn't allowed.  We did find a random pile of warning track dirt on the ground in the concourse, so I grabbed a handful and put some in the pillbox I keep on my keychain.  So I'll always have a piece of Fenway with me no matter where I go.  And when I die they can sprinkle some into the grave with me.  =)  Oh, a fun fact:  the guy giving the tour said that the warning track dirt was just made out of crushed bricks.  Yikes, imagine sliding on that to catch a ball.  Makes me appreciate Ellsbury that much more.  =) 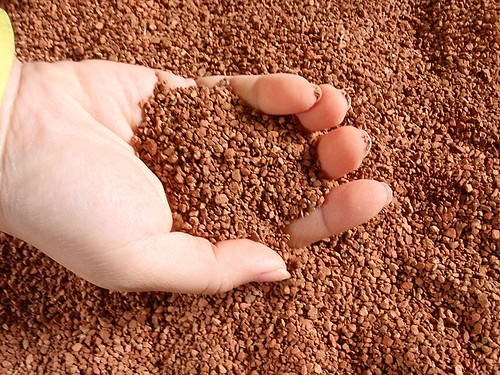 When the guy giving the tour mentioned that he ate up in the cafeteria with the media people, I immediately asked if we could go up there and look around.  So I did get to go up to the media booth level and peeked into some of the offices, but we didn't actually get to go into any of them.  I did notice that there was this cute sign outside of Booth F stating that it was a peanut-free zone.  Wonder who has the allergies.... 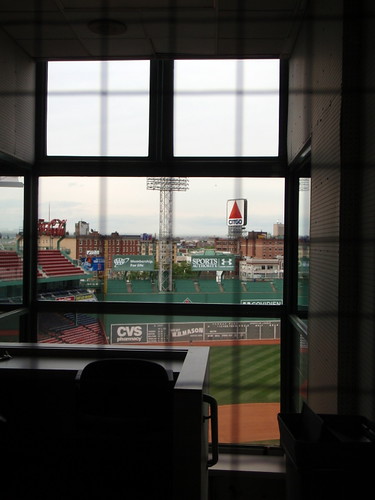 On the way out we got to go through the offices again, and I noticed the cutest model of Fenway Park sitting in the hallway, but when I asked if we could go take a look at it (and maybe a picture), the guy got a little nervous and said we probably shouldn't.  So I'm assuming it's a model of some super secret future plans for the park.  But it was so cute; I want one now.

Anyways, thanks, Nicole, for hooking a girl up!
Subscribe