I couldn't sleep all Sunday night because I was afraid they were going to postpone the Home Opener for Tuesday, and when I woke up at 6 am and saw that they hadn't made the call yet, I thought I was in the clear.  Eight o'clock and nine o'clock passed without a peep, and I was even more confident.  But then at 10:05 am, 4 hours before the game, they finally made the call to push the game back to Tuesday at 4:06 pm.  Which was what I was afraid of because I was supposed to fly out to Chicago that morning.

In the end, everything worked itself out, but at a pretty steep price, making this the most expensive game I'd ever gone to, but I knew it would be all worth it if only I could hear "Dirty Water" and "Tessie" that night.  =)

I headed over two hours before game time so I could be there when the gates opened for the first time this season.  Walking down Lansdowne Street I noticed a new addition to the exterior wall of Fenway:  a takeout window! 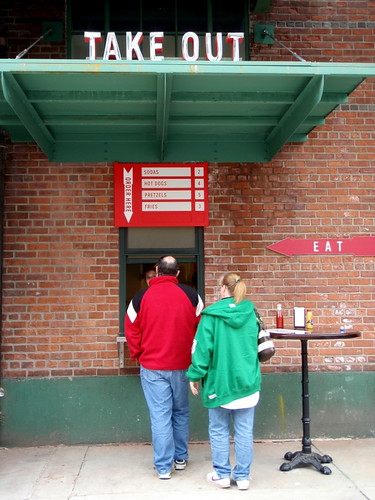 Once I got into the park, I ran up to the center field bleachers to get this shot of the Rays taking BP (the Sox were already done, boo):

Believe me, you really want to click on the picture to see it bigger

Then I looked down and saw this chiseled jaw and recognized this signature windmill throw; it was Gabe Kapler, back in Fenway (albeit as a Ray)! 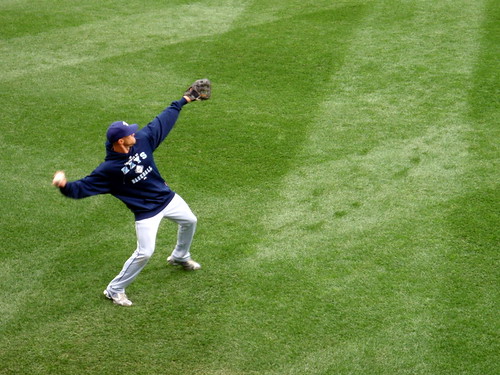 He was nice enough to help a fan out with getting his umbrella back too.  Aww, isn't Gabe the best?

And then I ran down to the concourse to grab my first Fenway Frank of the year before 3 pm so that I could take advantage of Fenway Family Hour when 9 selected concessions are half off.  Walking around I noticed a couple of other changes too.  The Pesky Pole had a fresh coat of paint so there was no more graffiti on it, although I'm sure that by the end of the season it'll be all marked up again.  The right field roof deck was completely different.  Can you spot changes?  (I think there are 5 in all, although you probably can't see them all very clearly from this picture.) 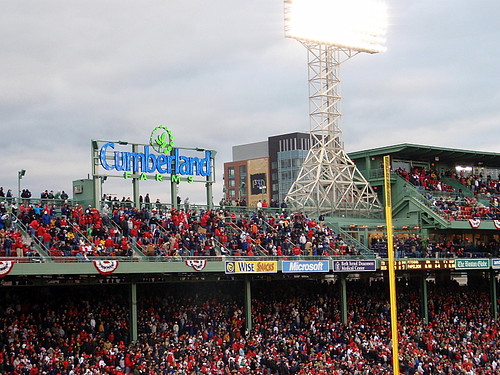 And finally, the bestest, most wonderful change to Fenway of all! 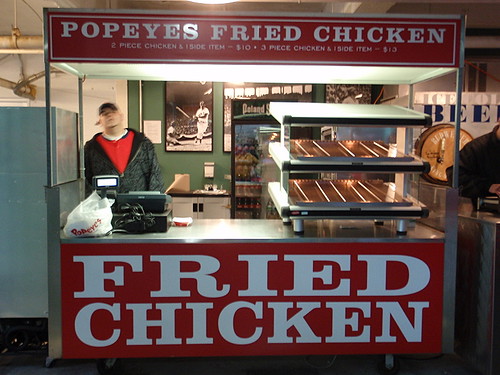 Unfortunately, I wasn't hungry enough to order any, but Dan did try out the new sliders they had added to the concessions menu.  They had fried fish sliders with tartar sauce, frish chicken sliders with Thousand Island dressing, and burgers with Russian dressing plus fries, all for $8.  Except apparently they hadn't added the button for that order to the cash registers yet, so Dan was only charged $7 for the combo.

For the national anthem, apparently Seal had a prior commitment for Tuesday so we just had Keith Lockhart and the Boston Pops, but at least we still had the fly by.  Ethan and I both got texts from friends saying they had heard or seen the planes fly over them several minutes before they flew over us.  And it looks like they have a rain proof flag banner to use; it was significantly more plastic looking than the previous two years'. 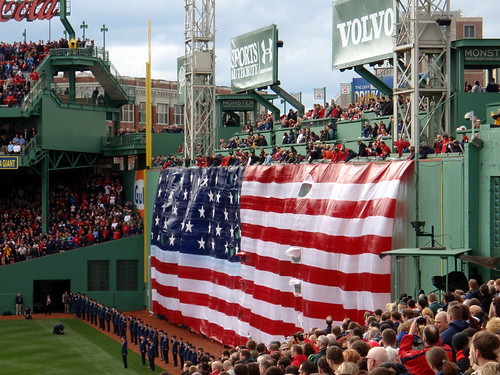 Well, the game finally started after Jim Rice and Ted Kennedy "threw" the first pitch, and Johnny Pesky said the two words we'd all been longing to hear for 5 months, "Play ball!"  Pedroia ripped a homer off the 2nd pitch he saw, BecKKKKKKKKKKett had 10 Ks, I called Annie during "Sweet Caroline", Papelbon came out to "Shipping Up to Boston", and all was right with the world again.  Baseball, my friends, is back.  So yeah, it was all worth it, because being at Fenway for Opening Day?  Completely priceless.  ^_^
Subscribe