This Saturday was the annual Christmas at Fenway, and while I didn't win the chance to actually go to Fenway Park to buy tickets, I was able to get one Sox Pak and tickets to 7 other games thanks to Leslie and Timmy.  Sunday was the Great Fenway Park Yard Sale, and I also didn't win the chance to go, but I did get an e-mail Sunday night saying I was a "Second Chance winner" to go on Monday.  All I knew about this yard sale was that I would have the chance to "purchase historic items from Fenway Park and Red Sox past."  There was some "grab bag" promotion where for $30 I would get this bag which included 2 bricks and 1 t-shirt and with which I could then fill with "magazines, pins, media guides, and other great items."  Also available for purchase would be "authentic game worn jerseys, used bats, ballpark signage, and seats from around Fenway Park."

I got there about 10 minutes early and there were already maybe 75 people ahead of me in line waiting for the doors to open.  When they did, we all rushed in to buy our "grab bags" and start stuffing them.  There were literally piles and piles of bricks just waiting for us to take and boxes and boxes of old t-shirts.  I ended up picking up a "Why Not Us" shirt from the 2004 World Series run.  Unfortunately, the smallest size I could find was a large, so I guess I have another workout shirt now.  I did also manage to grab a couple Red Sox magazines from this year, various media guides, a few baseball card packs, a Red Sox World Series pin, and World Series ticket holders.  Yeah, I don't know what I'm going to do with those either, but they were "free" so whatevs. 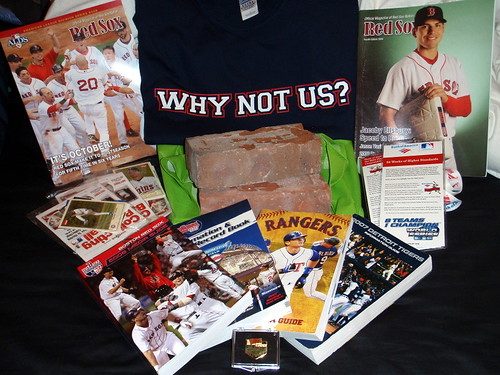 my loot
I then moved on to the next room where the real action was.  I really wish I had brought my camera because it would've been worth taking a picture of since I wasn't about to actually spend any money to buy this junk.  Still, large boxes full of used (and I mean seriously used, like mostly splintered) bats, old signage, chairs, tables, plates, tabletops, used jerseys, yearbooks, it was really a yard sale.  Too bad they didn't have any cooler signs; I would've loved to pick up something to put up on my walls.  The bar stool seats were pretty cool, but I just couldn't justify shelling out a few hundred dollars when I didn't even have a high counter to put them at.

click here for a larger (but equally crappy) picture
The best part of the whole thing was taking a peek into Fenway again and seeing it under construction.  Oh yeah, and meeting Miss O'Connor of sittingstill.net fame and Jerry from A Red Sox fan from Pinstripe Territory.  Hee, blog fan-girling indeed.  But yeah, owning a piece of Fenway?  Priceless.  ^_^
Subscribe